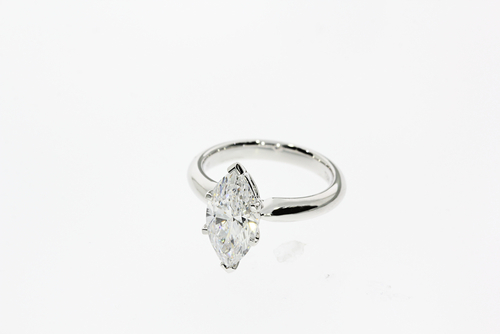 The marquise cut is one of the more popular choices when it comes to engagement ring shapes. Many celebrities, including Victoria Beckham and Catherine Zeta Jones, own engagement ring stones cut in this particular shape. What may surprise you though, is that it dates back all the way to the 1740’s. Following is a short look at the history of this genuinely beautiful cut.

Created in France and supposedly named after one of the mistresses to Louis the fifteenth (they say it had the same shape as her smile), it became popular in the 20th Century among many of the wealthy elite in Europe. The latter was due to the way it resembles a racing ship’s hull, which at that time, was one of the marks of opulence that people at the top aspired to.

With the passing of the years, this cut retained such of its popularity, despite many jewelry styles developing and replacing older ones. The modern era of fashion jewelry features marquise cut diamonds as centerpieces in both modern style rings and vintage-inspired designs. The cut itself looks more stunning when enclosed by a series of halo diamonds, although that also drives up the overall cost of the ring, which places the latter outside a lot of people’s budget.

The main appeal of marquise cut stones is that they comprise the longest stones in a comparable carat weight. In other words, when you look at one from the top, it looks much larger than a round cut diamond. The length of these stones is also instrumental in making the wearer’s ring finger look more slender, which a lot of women really appreciate.

The different options of setting fall in an appealingly wide range for most buyers. These stones look good not just when set in the classic vertical manner, but also with their points aligned in such a way that they are side-to-side. Even a diagonally placed setting can look extremely good, provided the rest of the ring sufficiently complements it. You could take the custom route, and do something like, say, set the stone beside other gems cut in the same shape. Here, the center marquise stone would have colored gems on each side. If you saw the rave comments such designs have been garnering on social media, you would scarcely hesitate to buy something of the sort yourself, or be disappointed after doing it.